So, this post may get a little emotional, but I feel I need to let this out, at least at the beginning.

So, last night, Sissy (my little sister) and I went to Virginia Beach for the Feed The Machine tour. This included Shaman’s Harvest as the opening act, followed by Daughtry and then Nickelback. We bucked out early to avoid traffic, because we had a long drive home anyway. I have to say this though. I HAD THE TIME OF MY LIFE!!

I started a bit bumpy though. We decided that we wanted to get to the area early, so we could walk along the beach for a bit. It took us about 30-45 mins just to find a parking spot, which we paid $40 to use a lot for a little over an hour. Guess they gotta make money somehow, huh? And, to add on to that, it was drizzling the whole time. about 15-20 mins after hitting the beach, thunder sounded, and everyone had to clear the water. A little more time later, and the rain got a bit heavier. By the time Sissy and I got back to the car, we were pretty wet. We sat in the car for twenty mins before heading toward the venue for the concert.

We stood in line for merchandise before the concert, and while there, Shaman’s Harvest started opening the show. Sissy and I actually thought they were pretty good, so I’ll be looking up their music soon and see how studio version sounds compared to live.

When Daughtry came on, Sissy and I were rocking! Standing up every couple of songs and belting the lyrics. I knew more of the songs than her, but I’m also a slightly bigger Daughtry fan than her. During songs we both knew, we’d occasionally look at each other as we were singing and broke into wide, laughing smiles.

However, Daughtry hit my emotions hard. Just barely into their set, they played “Waiting For Superman” and “Life After You“. If you can’t tell by some of these pictures I’ve already posted::

… I took JV Jr with me. A year or so ago, I was talking to the real JV about the last Nickelback tour that I’d wanted to take my Mom to. Unfortunately, the lead singer had to get throat surgery, and they cancelled the remainder of their North American tour. Lucky for me, because I hadn’t purchased tickets yet. Also, my Mom told me she probably couldn’t have done it mid-work week anyway. When I was mentioning it to JV, she told me that she’d LOVE to come if work schedule would allow. It broke my heart, because this tour was announced two or three days after she passed, and when I heard the news, I broke down again. Well, I was breaking down every 20 minutes back then anyway, but still.

So, in some way, she did get to come with me, in the form of JV Jr. The thing is, during those two songs I mentioned earlier, and when they closed with “September“, I was a bawling mess. Those songs just triggered something in me, and the dam broke. However, during “September“, I looked down at JV Jr for a moment. I knew JV would whack me for crying during any songs. The truth is, hearing that song live had me remember the good times we had during her too short life. Then I was crying for a whole ‘nother reason.

It took the stage crew over 45 mins or more to prep for Nickelback to come up on stage. During that time, the man sitting next to Sissy asked randomly, “Hey, who are you guys here to see? Nickelback or Daughtry?” Sissy replied honestly, “Both Daughtry and Nickelback.” The guy gave her a fist bump and said, “Awesome, you guys rock. I came for Daughtry but have never listened to Nickelback. After Daughtry’s performance, I hope they can follow up just as good.” Let me note that he was dancing and hollering to their songs, and also screaming answers and comments to Chad’s between-song banter while laughing.

Right before they started, I told myself, “You know you want to stay for two particular songs. Then you can leave.” As stated earlier, we had to drive back home afterward, and Sissy and I had experience with concert parking lots when seeing Danielle Bradbury, Thomas Rhett, and Brett Eldridge in Salem, VA during their Suits ‘N’ Boots tour in October 2015. If anyone one of you have been to a concert, you’ll know: THEY. ARE. THE. WORST.

Nickelback’s opening was AMAZING! They had the machine on stage that reflected their “Feed The Machine” Music video AND Lyric video, and opened with that song too. Shortly after, they played “Photograph“. That song is one of a couple dozen Kryptonites for me, so of course I was crying, for multiple reasons. During the rock songs, Sissy and I were belting the lyrics again, along with the rest of the crowd. Chad, the lead singer of Nickelback (If you didn’t know that already), was hilarious between songs, having me and Sissy cracking up. Some songs I didn’t actually know, as most of my Nickelback listening only stretches back to 2005, but now I have songs to look up that I want to know the lyrics too. 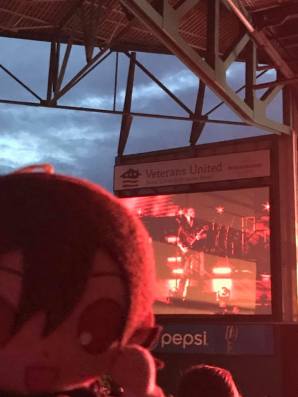 At one point during a break for the band to get some water, Sissy looked at me and asked if we should go while they take this weirdly long break. The stage was a bit dark, but we spotted the crew bringing out a small piano or keyboard. I had a feeling I knew what they were going to play next, and I told her, “Let’s wait until after ‘Lullaby‘.”

Sure enough, that’s what they played. It was AMAZING live. I was belting out lyrics while choking on tears. “Lullaby” is a song that has been a motivator and comfort for me ever since it came out. It talks about anxiety and depression and reminds people that struggle with inner demons like that that life gets better, and hurting yourself isn’t the answer. Whenever I’ve had friends in the past that were struggling with depression or hard times, I’d play them this song, and it helped a lot of them, to the point where they are downloading that song themselves.

However, during that song, I felt a chill. Now, this was an outdoor, covered ampetheatre, and it was a humid VA day, so chill would be out of place, right? That’s when I knew.

JV was there with me.

Once that song was over, Sissy looked at me and asked if I was ready to go. However, Chad was talking and leading up to their next song, and before he even said the next song title, I told her, “One last one. This is the last one I need to hear.” She nodded, knowing what would be next::

This song is another one of my weaknesses. Every time I hear it, I always think of JV. Her life was cut too short, but she lived her life just like the song says::

“Against the grain should be a way of life,
What’s worth the prize is always worth the fight,
Every second counts ’cause there’s no second try,
So live like you’ll never live it twice”

She lived like every day wasn’t promised. She was genuinely nice to everyone, never felt animosity, and always looked out for those she cared about. She was the best friend I could ask for, so halfway through the live performance, which was so well played live I couldn’t believe it, I cringed, tears streaming down my cheeks.

Then, I got that chill again. And I knew she stood there in the open spot to my left, hand on my shoulder, telling me, “It’s okay. I’m okay. So no more tears.”

After that song, Sissy and I left. I dozed off halfway home.

So, in a nutshell, it was the best concert of my life. Crossed Daughtry and Nickelback off my bucket list (Two in one night! WOW!), and had a blast with my Sister, who I don’t spend nearly enough time with.

It’s hard to believe it’s been over five months since I last heard her voice and laughter. I miss JV every day, every hour, every minute. But, thanks to that concert, I know she’ll always be looking out for me. Always.

Hug your loved ones. You never know what your future holds. Make every minute count. And live life like JV did, as If Today Was Your Last Day.